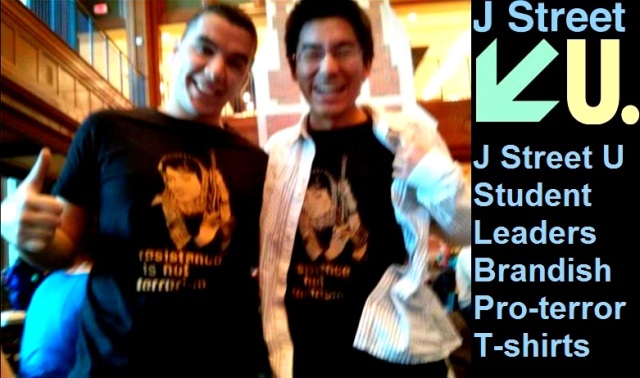 The Tower Magazineis reporting that two members of J Street U’s Washington University chapter donned T-shirts celebrating convicted PFLP terrorist Leila Khaled at a J Street U sponsored campus event last year. On August 29, 1969, Khaled was part of a team that hijacked TWA Flight 840 on its way from Rome to Athens. The T-shirts were emblazoned with an image of Khaled clutching an AK47 machine gun and the words “Resistance is Not Terrorism”.

The allegations broke this morning when photos were discovered of the two students [Fadi AbuNe’meh and Taka Yamaguchi] wearing the shirts at an event sponsored by J Street U last April. In coverage of the event, AbuNe’meh is quoted as a representative of the group. In AbuNe’meh’s Facebook postings when asked where they acquired the shirts, he pointed to a vicious anti-Israel website called existenceisresitance.org.

The second student in the photo…

It is no secret that Vladimir Putin’s regime shares many qualities to that of the Nazi regime: He is known to jail those who speak out against him in barbaric conditions, carry out ethnic cleansing campaigns of the populations in the Caucasus and more recently, annex territories that do not belong to Russia based upon past border history that no longer applies.

Geert Wilders, an anti-Islam politician in the Netherlands who lives under constant threat of assassination from Muslims, is a prime example of the threat of Islamic Fascism in Europe today.

The image below is from a rap video by a Muslim immigrant to the Netherlands who (according to the lyrics) fantasizes about kidnapping and executing Geert Wilders for claiming that Islam is dangerous.

The Dutch know only too well the horrors that follow the effects of Islamization, from artists like Theo Van Gogh who dared to create a movie that criticized Islamic subjugation of women and was subsequently shot eight times by a Muslim who then attempted to decapitate him, covered in this article. Ayaan Hirsi Ali, the apostate of Islam who featured in the movie, now lives in exile and under constant protection for fear of assassination.

Although I doubt the powers at be in Holland will take action over this blatant death threat from the Islamic rap video, in 2012 the ”Sharia 4 Holland” spokesman made a death threat against Geert Wilders and was let off with 150 hours community service and a small fine.

In the video below, during Geert Wilders visit to parliament in London, Muslims gathered outside and called for him to be punished with death simply for ”insulting” Mohammed. The British police (as always) stood by whilst the Muslims peddled their hatred and screamed death threats.

After the Second World War, The good people of Holland should, above most others, remember what Occupation means. Stand your ground Holland unless you desire a second Occupation, this time from Islam.

In the majority of European countries, to raise a foreign flag over a government building is considered an act of foreign dominance/aggression and a symbol of capitulation or surrender to another country.

In Rochdale, England: the town plagued by Pakistani sex trafficking and child rape gangs (whom the British police decided to ignore for years under the fear of being called ‘racist’) the council have disregarded this part of history and have demonstrated their ”Tolerance” to the towns Pakistani culture by raising the flag of Pakistan over the town hall.

The flag was raised by Mayor of Rochdale Councillor Peter Rush. The ceremony was attended by local dignitaries including Rochdale MP Simon Danczuk, Leader of the Council, Councillor Colin Lambert and local councillors.

The flag of Pakistan was raised at the Town Hall this morning (Friday 21 March) to commemorate Pakistan Day.

The flag was raised by Mayor of Rochdale Councillor Peter Rush. The ceremony was attended by local dignitaries including Rochdale MP Simon Danczuk, Leader of the Council, Councillor Colin Lambert and local councillors.

Ghulam Rasul Shahzad OBE, who arranges the flag raising every year, said: “It is about our heritage and providing information to the local community. It is also about our youngsters as well because they are the future.”

Flag of Pakistan being raised

Mr Shahzad was also thankful to Rochdale Council and local councillors for supporting the flag raising every year. He added: “I have to thank the Mayor for coming along and raising the flag and the council for their support every year. People come to this event and it really brings everyone together.”

MP for Rochdale, Simon Danczuk said: “It is great that we have so many people of Pakistani origin in Rochdale, not only in the community but in the business community as well. It is a pleasure to be here today.”

Students from Rochdale Girls School at the flag raising

Councillor Colin Lambert added: “This is about the cultural heritage that is brought to our borough.”

Councillor Ashley Dearnely said: “It is my pleasure to be here every year. It is great to see our town united and I think we have been lucky in that we haven’t had any issues within our town, like the riots in Oldham. People really are at the heart of our community.”

Pakistan Day celebrates the commemoration of the Lahore Resolution. The Lahore Resolution called for independent states for Muslims in north western and eastern British India. It was then decided that a separate and single state would be created. This was called Pakistan.

Thanks to the great Blog: Tundra Tabloids for this post.

Brutal photo available at the bottom of the post.

Abdurahman, apparently a Dutch jihadi from Almere, can be seen on You Tube with a bloody knife behind five cut-off heads. He is originally from Iraq, and has lived more than ten years in The Netherlands. He lived there from social security as he was found unfit to work and used drugs against claustrophobia and schizophrenia.

In 2012 an AFP picture emerged on which Abdurahman could be seen next to a dead body, while he was reading the Koran. Initially he joined the Jabhat-al Nusra movement in Syria, which is linked to Al Qaida. It seems that he has now moved to the even more barbarian ISIS jihadis. It is claimed that the heads were cut off from Al Nusra fighters.

Buddhist Teacher Shot and Set on Fire by Islamic Insurgents

A female Buddhist teacher has been repeatedly shot in the head, doused in gasoline and burnt, the latest causality in the growing list of 5000+ murdered Buddhists in the Islamic insurgency in the southern provinces of Thailand.

Our related articles include: Thai Muslim Terrorists Hunt Down Buddhists and My Personal View of the Myanmar Violence.

A 42-year-old Buddhist teacher on her way to school in southern Thailand on Friday was targeted and shot twice in the head, then doused in gasoline and set on fire by suspected Muslim insurgents.

The woman taught English and was riding her motorcycle to work when the gunman — who was riding his own motorbike — fired off the shots to her head, said police Maj. Gen. Pete Susysuwan, in The Associated Press. Other suspected insurgents then helped to set her body on fire, police said.

“She is apparently a victim of the insurgency, not personal issues, because the suspects scattered fliers with anti-Buddhist messages before they fled,” he said, in the AP report.

The authorities are still seeking the suspects.

More than 5,000 have been killed in Islamic insurgency attacks that have gone forth in Thailand since 2004, AP reported.

“We’ll shoot anyone for a cause, Mohammed Merah! Bang bang in your head, we’ll blow you away, we’re angry like Merah!”

Although it is common for Muslims in Europe to spout viscous Antisemitism openly, I am sickened how the praise of the anti-Semitic child killer, Mohammed Merah, whose victims included 3 French paratroopers and 3 Jews: Jonathan 30, Gabriel 4 and Arieh Sandler 5, has been allowed to be aired in the Mainstream rap scene of France.

Perhaps the worst part is that ‘Booba’ has not been arrested yet.

A French watchdog group filed a complaint this week against a rap artist it accuses of glorifying the anti-Semitic murderer Mohammed Merah.

The National Bureau for Vigilance against Anti-Semitism, or BNVCA, filed the complaint with police against Elie Yaffa, better known in France by his stage name Booba, in connection with the lyrics of a song titled “Porsche Panamera.”

The video was removed from Booba’s official YouTube channel on Wednesday, the day BNVCA published a statement condemning the video.

Mohammed Merah, who killed three children and a rabbi in 2012 in Toulouse, is mentioned twice in the song, which Booba performed together with the rap group S.D.H.S Family.

“We’ll shoot anyone for a cause, Mohammed Merah,” the group sings. “Bang bang in your head, we’ll blow you away, we’re angry like Merah.”

Later in the number, they sing: “Allah Yerahmo [Arabic for ‘May Allah have mercy on him’], because only crime pays off.”

“Booba’s lyrics amount to endorsing the anti-Jewish and anti-French killer of Toulouse, who is clearly referenced,” Sammy Ghozlan of BNVCA told JTA.

Booba, the son of a Muslim father from Senegal, last year drew anti-Semitic social media attacks when a song he released called for vengeance for the victims of slavery and the Holocaust.

Booba has sold more than 1 million albums in France.