Posted on January 5, 2013 by Tiberius Adalwolf

We received an email this morning containing screenshots from a Pro-Islamic, far Left, anti-EDL page which we have covered in articles before.

The members of SLATEDL create and use troll accounts to fish for pictures and details on EDL members and other counter Jihadists and post them on their website in the hope that they will be attacked by their rabid Antifa gangs, The group frequently use bullying and harassment campaigns against anybody who disagrees with them.

In the past we have posted an article on this same group, one in which they tried to condemn figures calling Muslims ‘savages’ by posting a news article covering the ‘reformed relative’ of a Muslim gang murderer who brutally killed an innocent non-Muslim teenager in a racial attack, backfiring spectacularly.

This week, they have hit a low even I did not expect Leftists to sink to, as SLATEDL admins and members, praise vile child molester, torturer, rapist and murderer Fred West and make light of his sickening and bloodthirsty crimes against innocent women.

The group posted a picture of vile British serial killer Fred West next to a picture of an unknown figure (presumably somebody who did not fit in with their warped way of thinking) claiming that the two had a resemblance, one of the followers of the group using the name “Ozzy Brotherton” then commended Fred West as “Good old Fred West” and “What a Grafter (hard worker)” this is a reference to Fred West being involved in the building and construction industry, a trade which he used to conceal the bodies of his victims.

The SLATEDL group are highly critical of anti-Islamic comments on Counter Jihad pages, yet, this vile comment received 4 likes from like minded members of the group. 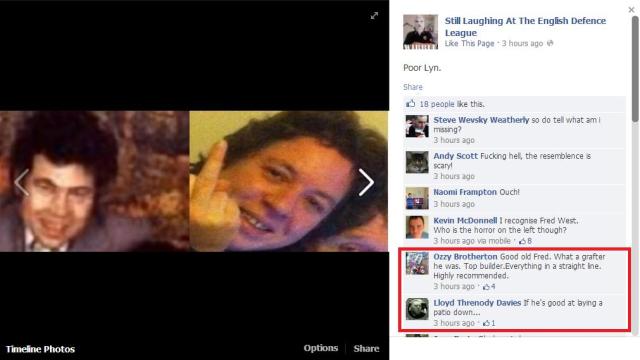 Another member called Lloyd Davies then wrote the following sick comment: “If he’s good at laying a patio down” this is in reference to Fred West burying the bodies of his victims under the patio behind his house, his victims were cruelly tortured, sexually abused, raped and brutally murdered.

As you can see in the above screenshot, a member using the name, Andy Scott then remarks: “I heard his cellar renovations were top class” this is in reference to the tortured and dismembered bodies of victims which were found buried under the cellar floor of Fred and Rose West’s home.

If you would like to see how the admin of the SLATEDL page reacted when somebody published our article on their page: “Well it made me laugh” 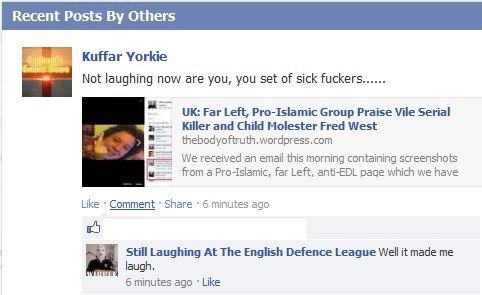 So it is clear that not only the followers of SLATEDL are attracted too and find amusing the torture, dismemberment, rape and child molestation that Fred West carried out but the admin of the page shares the same sick mentality.

The sickening views shown by this group, who do everything in there power to defend horrific Islamic actions around the world and condemn Counter Jihad groups, show their vile ideology for what it truly is.

Whilst looking through the page myself a few months ago, I also grabbed a screenshot showing one of the admins of the page admitting to being a drug addict and taking acid.

Defending Muslim rapists, Praising child molesting serial killers and boasting about their drug addiction, I really don’t think that SLATEDL have the authority to criticize any counter Jihad group.. their sick behavior gives a sort of explanation as to why they are lap dogs to Muslims, they simply share the same sickening mindset.

Thank You for reading, feel free to link and share this article to ensure more people see the sickening face of this far left, pro-Islamic group.

If you wish to reproduce this article on your own site, please be kind enough to link back to our original article here, Thank You.