Posted on November 17, 2012 by Tiberius Adalwolf 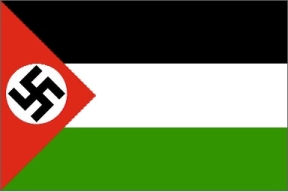 A shocking video from the streets of LA and a Leftist/Muslim rally leader gives a Nazi style, genocidal speech against Israel.

A brave, lone Jewish man, proudly holding an Israeli flag turned out to confront them.

Recently we have posted how on Muslim Day in New York, an Imam led the group in performing mass Nazi salutes, as a young British Muslim gave a rap that incited murder against Israeli citizens, You can read about it here.

Leftist / Muslim US rally leader declares to Israeli Consulate in L.A.: “We will not stop speaking until you either die, or “Palestine” is free… And your (Jewish) minions here in West L.A…We will f*cking chase YOU (into the ocean)!”

Anti-Islamization, Pro-Caucasus Blogger. Georgian Patriot. Counter-Jihadist. Anti-Islam. Anti-Russia. Idealist.
View all posts by Tiberius Adalwolf →
This entry was posted in Islam in The US & Canada, Israel and the Middle East, Muslim Anti-Semitism. Bookmark the permalink.