Posted on October 6, 2012 by Tiberius Adalwolf

To view our past articles exposing the far Left, click here.

I was recently informed of an anti-EDL group on Facebook called Still Laughing at the English Defence League, although everybody is entitled to their own opinions, the members of this group clearly have a lot of free time on their hands, as they create and use troll accounts to fish for pictures and details on EDL members and other counter Jihadists, post them on their website in the hope that they will be attacked by their rabid Antifa gangs, The group frequently use bullying and harassment campaigns against anybody who disagrees with them.

SlatEDL is headed by a man named Gary Fiennes-Hastings, who is rumoured to have different names such as Gary Moon, Alan Moon, He earlier this week sent me an email attacking my views and poorly attempting to debunk them, which backfired, you can read about it, here.

Many members of SlatEDL are clearly Far Left extremists who show support for Communism and some for Russia, at one time I was attempting to debate one of their members when he discovered I was Georgian, he stated how me and my people are simply “a filthy parasite against Russia” and he wished that “my family had been raped and murdered” when Russian forces invaded Georgia in 2008, I guess Liberals and not so “Liberal” when it comes to their support of ‘Mother Russia’.

Today I checked the wall of their Facebook page, to discover that they had posted a link in an attempt to attack the views of the EDL, the article was about an ex-Muslim gang member who had turned ‘nice’ and was given a cash reward for it, reading on through the article I then discovered that the ex-Gang member was the younger brother to Shaied Nazir, the Muslim gangster and murderer who took part in the brutal, unprovoked and racially motivated murder of Ross Parker, a non-Muslim teenager, in Peterborough, 10 days after the September 11 terrorist attacks in 2001. The gang also used the garage behind Nazir’s house as the gang “headquarters”. 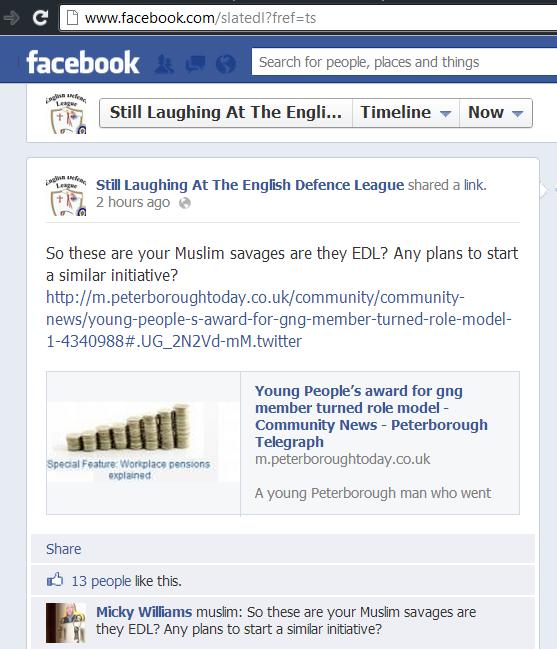 Here is the screenshot from the article, notice how Atiq does not condemn his murdering brother, the murder or issue an apology to the family of Ross Parker, he simply comes out with a sob story of how he was treated (boo hoo) after the brutal racist murder his brother took part in:

The Report on The Murder of Ross Parker

Ross Parker was murdered when walking home from work with his girlfriend.The attack took place in Peterborough. Racial tensions in the area were high, as the terrorist attacks in the U.S. had occurred ten days earlier, on 11 September.

Ross and his Girlfriend were confronted by a gang of up to ten Pakistani youths, some wearing balaclavas. Members of the gang had planned “to find a white male to attack simply because he was white”. They warned Parker he had “better start running”, but then blocked his path and quickly sprayed him in the face with CS gas. He was punched in the stomach and stabbed from behind three times through the throat and chest with a foot-long hunting knife. The knife penetrated right through his body on two occasions and as he was lying on the ground he was repeatedly kicked and struck with a panel beater’s hammer.

His girlfriend ran to a nearby petrol station to find help and a man there gave her his mobile phone so she could call the police. Whilst making the call, she twice heard Parker cry out in pain. By chance she then spotted a passing police car; she entered the vehicle and took the officer to the scene of the assault. Although she had only been away for a few minutes, by the time she returned Parker had already bled to death and the gang had disappeared.

After the murder, the four accused returned to a garage behind Nazir’s parents’ house which they used as their headquarters. Awan, brandishing the bloodied knife, exclaimed “cherish the blood”. Parker’s body remained at the scene during the day while an investigation was conducted. A post mortem revealed Parker had died as a result of stab wounds inflicted by a bladed instrument.

So, members of Still Laughing at the English Defence League, perhaps Mohammed Atiq Nazir has changed his life around and is “not a Muslim savage” as you say, but he is without doubt related to Shaied Nazir who is a murdering savage who took an innocent young mans life simply to fuel his racist Muslim rage.

I also wonder why, when SlatEDL discover an ex-Criminal in the EDL, they go into a frenzy and use it as a tool to falsely state that the entire organization is made up of criminals, yet when they come across an Muslim ex-Criminal, they are swooning over it as if it is something they can praise the Muslim community for.

Perhaps you should look into what you are supporting before you show your undying support for the Muslim community, at the same time, find something useful to do with your lives instead of maintaining an unhealthy and psychotic obsession with the EDL and it’s leader, as you remind me of the Remora fish that swim along side sharks, without the shark (EDL) your existence would be meaningless, you Dhimmi morons.