Muslims Demand Pope Apologise for The Reconquest of Spain

Posted on October 3, 2012 by Tiberius Adalwolf 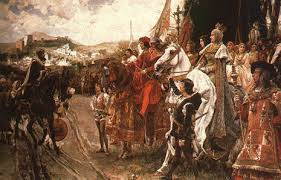 A couple of weeks ago, just before the Pope was due to visit Lebanon, the International Union of Muslim Scholars (IUMS), based in Qatar, called for him to issue an apology during his visit. This received some media coverage but, as far as I can see, the news reports only touched on the demand that he apologise for the speech he gave in Ratisbon in 2006. Left out of the mainstream reporting, though, was the fact that the “Muslim scholars” also demanded an apology for the Christian reconquest of Spain, or Reconquista as it is known.

The IUMS have shown an incredible display of ignorance and hypocrisy here, as they demand that the Pope apologize for the reconquest of Spain by it’s rightful owners, Spain as in the same land in which the Moorish Muslims invaded, stole and colonized to begin with and had no rightful claim to the land whatsoever.

On September 13, 2012, the day before Pope Benedict XVI began his visit to Lebanon, the International Union of Muslim Scholars (IUMS), headed by Sheikh Yousuf Al-Qaradhawi, issued a communiqué attacking him. The IUMS called on the pope to apologize for the acts of slaughter committed by the Crusaders in Spain, and for a 2006 lecture in which he claimed that the Muslim religion supports violence.

While the [International] Union [of Muslim Scholars] is working to calm the rage of Muslims worldwide, [which was aroused] by non-Muslims insulting the honorable Messenger [i.e. the Prophet Muhammad], [so that they] confine themselves to peaceful protests and not attack any embassy or Christian site – it [also] calls on the pope to apologize to Muslims for his lecture [in 2006 in Regensburg, Germany],[ his apostolic exhortation, and the slaughters committed by the Crusaders [against Muslims] in Andalusia, just as he apologized to the Jews.

I personally believe that non-Muslims have absolutely no reason to apologize for anything to Muslims, until the last Barbaric 1400 years of Islam have been redeemed, which is not likely due to the unaccountable barbarity continuing and becoming worse each day, all in the name of Islam.