Pakistan’s “Day of Love” Descends into Rioting, Death and Chaos

Posted on September 21, 2012 by Tiberius Adalwolf 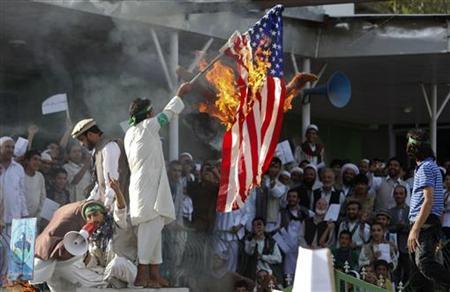 Yesterday we exposed British Pakistani Muslims expressing their support for Hitler and the holocaust, it appears their event planning skills are not much to be desired for either.. as the Muslim “Day of Love” descended into rioting, death and chaos.

Pakistani Protesters class with police on Muslim “Day of Love”

Demonstrators clashed with police in the Pakistani city of Peshawar on Friday as anger over insults to the Prophet Mohammad boiled over despite calls from political and religious leaders across the Muslim world for peaceful protest.

Western diplomatic missions throughout the Muslim world tightened security, with some closing down on expectation of big protests after Friday prayers.

An anti-Islam film made in America has enraged Muslims and led to days of protests across the Muslim world while cartoons mocking the Prophet Mohammad published in a French magazine on Wednesday were expected to compound the anger.

But the call looked unlikely to calm the outrage.

“An attack upon the Holy Prophet is an attack on the whole 1.5 billion Muslims. Therefore, this is something unacceptable,” Pakistani Prime Minister Raja Pervez Ashraf said in a speech to politicians, religious leaders and others.

Pakistan has declared Friday a “Day of Love for the Prophet Mohammad”. Critics of the unpopular government said it was pandering to Islamist parties.

Protesters took to the streets of the Pakistani city of Peshawar, an old frontier town on the main road to Afghanistan, and torched two cinemas and clashed with riot police who tried to disperse them with teargas.

At least five protesters were hurt, a doctor at the city’s main hospital said. The ARY television station said an employee had been killed.

Near the capital, Islamabad, protesters set fire to a motorway toll booth. The previous day, about 1,000 stone-throwing protesters clashed with police as they tried to force their way to the U.S. embassy.

The government shut down mobile phone services in more than a dozen cities as part of security arrangements ahead of protests expected on Friday.

The U.S. embassy in Pakistan has been running television advertisements, one featuring Secretary of State Hillary Clinton, saying the government had nothing to do with the film.

The U.S. and French embassies were closed on Friday in Jakarta, capital of Indonesia, which has the world’s biggest Muslim population, and diplomatic missions in the Afghan capital, Kabul, were on lock-down.

Police in Kabul said they had been in contact with religious and community leaders to try to prevent violence.

“There are some angry demonstrators who will encourage people to violence,” senior police officer Mohammad Zahir told Reuters. “There will also be Taliban influence in demonstrations too and they may attack the U.S. and other embassies.”

About 10,000 Islamists gathered in the Bangladeshi capital, Dhaka, after Friday prayers to chant anti-U.S. and anti-French slogans. They burned those countries’ flags and an effigy of U.S. President Barack Obama.

The cartoons in France’s Charlie Hebdo satirical weekly have provoked relatively little street anger, although about 100 Iranians demonstrated outside the French embassy in Tehran.

Western embassies tightened security in Sanaa, fearing the cartoons could lead to more unrest in the Yemeni capital where crowds attacked the U.S. mission last week over an anti-Islam film made in America.

In Tunisia, the birthplace of the Arab Spring revolts, the Islamist-led government decreed a ban on protests planned on Friday against the cartoons. Four people died and almost 30 were wounded last week when protesters incensed by the movie about the Prophet Mohammad stormed the U.S. embassy.

Condemning the publication of the cartoons in France as an act verging on incitement, Egypt’s Grand Mufti Ali Gomaa said on Thursday it showed how polarised the West and the Muslim world had become.

Gomaa said Mohammad and his companions had endured “the worst insults from the non-believers of his time. Not only was his message routinely rejected, but he was often chased out of town, cursed and physically assaulted on numerous occasions.

“But his example was always to endure all personal insults and attacks without retaliation of any sort. There is no doubt that, since the Prophet is our greatest example in this life, this should also be the reaction of all Muslims.”

Stevens and three other Americans died in an attack on the U.S. consulate in the eastern city of Benghazi by gunmen among a crowd protesting against the film that denigrated the Prophet.