US Ambassador Murdered in the Cause of Islam

Posted on September 12, 2012 by Tiberius Adalwolf

Another innocent man murdered in the cause of Islam, this time a US Ambassador to Libya.

In another Muslim demonstration of hypocrisy of the highest order, Libyan Muslims protested against an amateur made short film that portrayed Islam as violent.. by storming the US embassy in Benghazi, murdering Americans inside, burning the American flag and raising the black flag of al-Qaeda above the embassy.

This hatred, murder and disrespect occurred on the 11th anniversary of 9/11, not that the mass murder of 3,000 innocents in the name of Islam had anything to do with the Muslims rage and attack on the embassy. No, Apparently, somebody, somewhere said something offensive about Islam.

The United States Ambassador to Libya was brutally killed by a Muslim Mob as he was dragged through the streets of Benghazi, Libya.

The next time somebody attempts to fabricate Islam as a “religion of peace” or tries to tell you that your views and criticism of Islam are wrong, show them this picture.

R.I.P – J. Christopher Stevens and condolences to his family, Another name to add to the tragic list of thousands murdered in the cause of Islam since 2001.

For the Leftists and Muslims, your silence on matters like this is deafening. Those who are silent are only complicit in Islamic murders like this that occur all over the world.

The following screenshots show that many Muslims have also expressed their praise and support for the murder of the innocent American ambassador on Facebook:

And granting their approval with the ubiquitous “Allah o Akbar!” 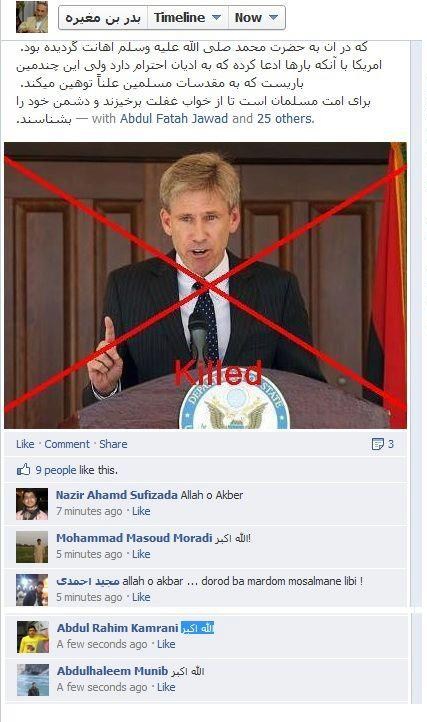 More comments from the first picture, one female Muslim even goes so far as to call the Ambassadors death “conspiracy” as another states that everybody involved in the anti-Islamic film “will pay” 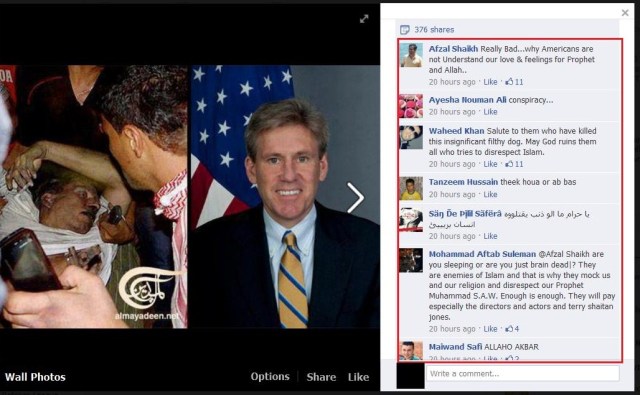 7 Responses to US Ambassador Murdered in the Cause of Islam