Muslim Parents who killed ‘westernised’ daughter, 17, convicted of her murder

Posted on August 5, 2012 by Tiberius Adalwolf 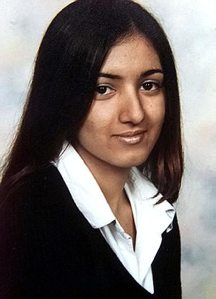 Yet another tragic case of an Islamic Honour Killing, in which an innocent teenager was murdered by her parents for apparently being too ‘Westernised’

A Muslim couple brutally murdered their ‘westernised’ teenage daughter because they believed she had brought shame on the family were convicted of her murder yesterday – nine years after the brutal killing of the innocent girl.

They parents: Iftikhar Ahmed, 52, and his wife Farzana, 49, who are from Warrington in the United Kingdom, suffocated Shafilea, 17, with a plastic bag in an Islamic honour killing.

Shafilea’s sister Alesha told Chester Crown Court she heard her mother say ‘just finish it here’ as they forced a plastic bag into the teenager’s mouth, killing her.

The killing followed a series of clashes with the strict parents, the jury heard. Months before her death, Shafilea drank bleach on a trip to Pakistan because she feared she was going to be married off in an arranged marriage to a Muslim man.

The teenager, who was aspiring to become a lawyer, ran away from home several times. And eight months before her death she sought emergency accommodation, saying her Muslim parents were becoming increasingly violent.

“As long as people believe in absurdities they will continue to commit atrocities.” – Voltaire

The Body Of Truth

1 Response to Muslim Parents who killed ‘westernised’ daughter, 17, convicted of her murder